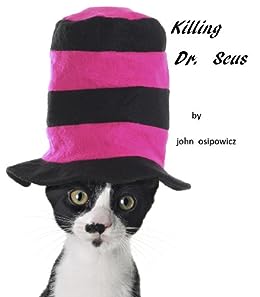 Killing Dr. Seus-------------------mystery novel------------97, 349 wordsThe Cat in the HatHe plays lots of bad tricks.Don’t you let him come near.You know what he didThe last time he was here. -------------The Cat in the Hat Comes Back (Dr. Seuss)“The art of war is simple enough. Find out where your enemy is.Get at him as soon as you can. Strike him as hard as you can,and keep moving. -----Ulysses Simpson Grant Claude Seusman, a history professor at the University of Wisconsin, is shot to death in the parking lot near his office. Dr. Seus, as he is affectionately called by his students, seems to have led a boring life, leaving rookie cop Austin Simmons puzzled as to why anyone would want to murder the middle-aged teacher. However, when Austin digs deeper he finds plenty of candidates, including Seusman’s wife, colleagues, and even his own children. Seusman himself was not the stodgy academic he appeared to be. During the course of his investigation Austin himself has trouble maintaining the straight and narrow causing his path to become very crooked and full of sinkholes. He tries to depend on the people close to him, and that’s when things really fall apart. ------------------BIO: As a youth, reading was my passion. Because of my love for literature I guess it was natural that I would gravitate to teaching English. I was married while I was in college and for financial reasons I sidetracked my teaching desire for a bit to go into advertising with the Chicago Tribune. There was some creativity possible there, but after a few months I was counting the bumps on the road as I traveled from client to client. An opportunity opened up at my old high school in Madison Wisconsin to teach. This was a long time ago. Being a full-time teacher, baseball coach, and yearbook adviser, I made the enormous salary of $5000. With one daughter already born and two more on the way for the next six years we barely survived financially. Still feeling the pinch monetarily, I decide to take a business venture to Philadelphia selling yearbooks. For one year as I sat in school offices waiting to talk to Principals, I discovered I was paying attention much more to the students than my sales pitch. So back I went into teaching and stayed there for the next thirty-four years. I knew now I was in the right field. When I retired after forty total years in teaching, I looked forward to freedom from getting up each morning at five A.M. However, that freedom came with a price—boredom. There was only so much TV I could watch. I decided to take up writing, and I’ve been doing that ever since. These last ten years I’ve averaged at least three novels a year, which puts me at thirty-three as I write this

State Of Deception: The Power Of Nazi Propaganda Documentos PDF

"Propaganda," Adolf Hitler wrote in 1924, "is a truly terrible weapon in the hands of an expert." State of Deception: The Power of Nazi Propaganda documents how, in the 1920s...

Green Building Illustrated is a must-read for students and professionals in the building industry. The combination of incredibly expressive illustrations and accessible...